I want to use point type like Adobe Illustrator even in Adobe InDesign!

Creating a text frame and adjusting its size when I just want to enter a single line is a hassle. How easy it would be to type text with just a click.

With such thoughts for more than a dozen years, I finally realized what seems to be point text with script.

Click anywhere in the document with the Type On A Path tool and you can enter text as it is.

However, I’m sorry for those who are expecting Illustrator point type, because I use InDesign’s type on a path feature, so only create one line.

That’s why I named it “InDesign oneLiner”.

Move these files to the “Script Panel” folder (you can move the entire folder). If you want to reside in InDesign, move only oneLiner.jsx file to the “Startup Script” folder.

The destination folder is in the following location.

Finding this folder can be difficult because there are hidden folders along the way. In that case, select the “Users” folder in the Script panel of InDesign, and click “Reveal in Explorer” (Win) or “Reveal in Finder” (Mac) in the panel menu. The “Scripts Panel” folder opens. So go up one level and create a “StartUp Scripts” folder there.

In addition, there is a “Scripts” folder in the InDesign application, but it should not be placed there (it will give a permission error).

If you want to stop, double click “oneLinerQuit.jsx” in the script panel. If you put it in the “StartUp Scripts” folder, you must restart InDesign to resume.

In addition, It is safe to put them in both the “Scripts Panel” and “StartUp Scripts” folders.

Click the Type On A Path tool(ShortCut: Shift+T). The cursor changes shape. For those who are difficult to click, double-click “TypeOnPathTool.jsx” instead.

To use the original Type On A Path tool, click the tool icon and then press the ESC key. Returns to the original cursor state.

To change the scale, move the cursor to the end of the graphic line, and when the cursor changes to ↔, drag while holding down the Ctrl key (Win) / Command key (Mac).

The properties of the text created by oneLiner follow the settings of the current panel in InDesign, but you can use oneLinerConfig.jsx to specify the paragraph style when creating.

With oneLiner.jsx running and a document open, double-click oneLinerConfig.jsx in the script panel. List the applicable paragraph styles in the document and select the paragraph style to apply. 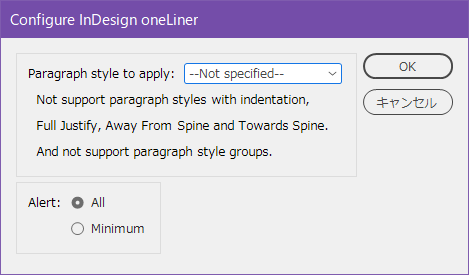 When “Alert:” is set to “Minimum”, the following alert message is not displayed.

If you see the following screen, it means that an error has occurred in the script and it has been paused.

If you receive this error, click Yes to exit the script, save your document immediately and exit InDesign. If you continue, InDesign may crash.

At this time, the message in the red box is the key to investigating the cause. Please record this and send Category as “oneLinerのエラー報告” later from the inquiry form of this site. 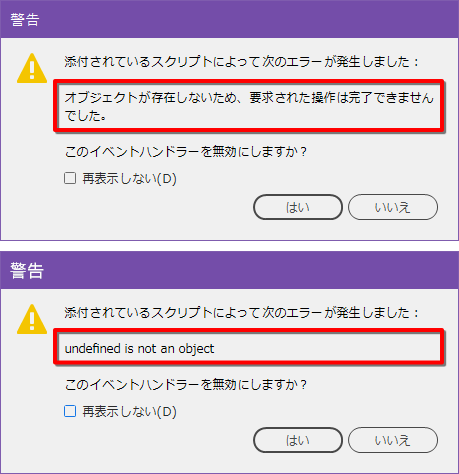 This script is free. Use at your own risk as it may cause a crash.